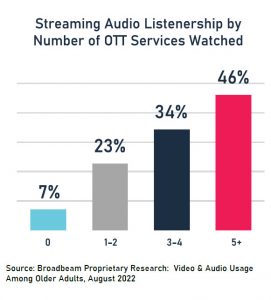 But it is job status, not age, that may be the most critical factor. Broadbeam says overall audio content consumption is highly tied to employment. One quarter of retired respondents reported not listening to any audio content in the last month, compared to 11% among those aged 55 working fulltime. For radio specifically, the survey found 66% of fully employed respondents listened to AM/FM versus 59% of retirees. The employment status gap also held true for podcasting and streaming music.

Podcasts are the hot audio segment right now, and Broadbeam says its data shows that younger seniors lean more towards podcasts — but among people aged 70 and older, satellite radio has twice the reach with 18% satellite versus 9% for podcast listening. It says satellite radio is also more popular among high income households with a third (33%) of those with $100,000 or more in annual income subscribing to satellite radio compared to 9% of households with income less than $50,000.

Overall, Broadbeam’s survey found broadcast television has the highest reach of any platform among people aged 55 and older. In this study, 84% of this group had watched broadcast or cable TV in the last month. Broadcast radio ranked second with 62% saying they had listened to AM/FM radio.

“While older adults are generally slower to adopt new technologies; it’s important to remember that this group is not homogenous,” the report says. “As some seniors hold on to linear like an old habit, others have long been expanding their media options and will continue to do so. Especially for the growing percentage of seniors struggling to make ends meet, the streaming landscape offers a growing number of alternatives to the passive view experience of TV channels.”

Broadbeam surveyed 1,000 people over the age of 55 about their lifestyle along with their video and audio usage and adoption. The survey was fielded from June 30 to July 6. Download the summary HERE.

View the original article on Inside Radio here.