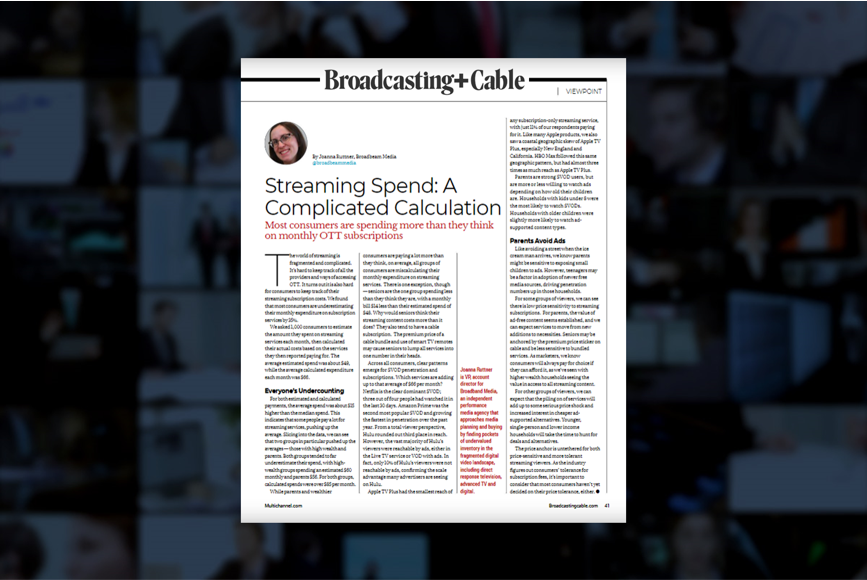 We asked 1,000 consumers to estimate the amount they spent on streaming services each month, then calculated their actual costs based on the services they then reported paying for. The average estimated spend was about $49, while the average calculated expenditure each month was $66.

For both estimated and calculated payments, the average spend was about $15 higher than the median spend. This indicates that some people pay a lot for streaming services, pushing up the average. Slicing into the data, we can see that two groups in particular pushed up the averages — those with high wealth and parents. Both groups tended to far underestimate their spend, with high-wealth groups spending an estimated $60 monthly and parents $56. For both groups, calculated spends were over $85 per month.

While parents and wealthier consumers are paying a lot more than they think, on average, all groups of consumers are miscalculating their monthly expenditure on streaming services.  There is one exception, though — seniors are the one group spending less than they think they are, with a monthly bill $14 less than their estimated spend of $48. Why would seniors think their streaming content costs more than it does? They also tend to have a cable subscription.  The premium price of a cable bundle and use of smart TV remotes may cause seniors to lump all services into one number in their heads.

Across all consumers, clear patterns emerge for SVOD penetration and subscriptions. Which services are adding up to that average of $66 per month? Netflix is the clear dominant SVOD; three out of four people had watched it in the last 30 days. Amazon Prime was the second most popular SVOD and growing the fastest in penetration over the past year. From a total viewer perspective, Hulu rounded out third place in reach. However, the vast majority of Hulu’s viewers were reachable by ads, either in the Live TV service or VOD with ads. In fact, only 10% of Hulu’s viewers were not reachable by ads, confirming the scale advantage many advertisers are seeing on Hulu.

Apple TV Plus had the smallest reach of any subscription-only streaming service, with just 11% of our respondents paying for it. Like many Apple products, we also saw a coastal geographic skew of Apple TV Plus, especially New England and California. HBO Max followed this same geographic pattern, but had almost three times as much reach as Apple TV Plus.

Like avoiding a street when the ice cream man arrives, we know parents might be sensitive to exposing small children to ads. However, teenagers may be a factor in adoption of newer free media sources, driving penetration numbers up in those households.

For some groups of viewers, we can see there is low price sensitivity to streaming subscriptions.  For parents, the value of ad-free content seems established, and we can expect services to move from new additions to necessities. Seniors may be anchored by the premium price sticker on cable and be less sensitive to bundled services. As marketers, we know consumers will always pay for choice if they can afford it, as we’ve seen with higher wealth households seeing the value in access to all streaming content.

For other groups of viewers, we can expect that the piling on of services will add up to some serious price shock and increased interest in cheaper ad-supported alternatives. Younger, single-person and lower income households will take the time to hunt for deals and alternatives.

The price anchor is untethered for both price-sensitive and more tolerant streaming viewers. As the industry figures out consumers’ tolerance for subscription fees, it’s important to consider that most consumers haven’t yet decided on their price tolerance, either. 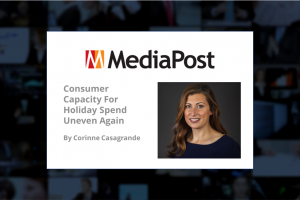 by Corinne Casagrande, SVP Strategy and Growth As marketers navigate the second pandemic-influenced holiday season, some conditions look a little like last year. Holiday shopping has 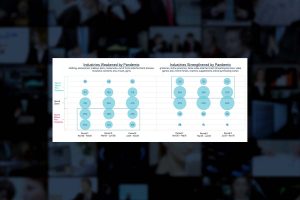 Below is a breakdown of how respondents said they spent on selected product/services categories over the last year but relative to pre-pandemic. For those industries