You’ve read the articles and heard the buzz:

Did everyone move during the pandemic? If so, wouldn’t that be one of the most important shifts in geographic targeting marketers needed to adjust for in the past decade?

The numbers don’t support this narrative, however. The actual percentage of people moving in the U.S. is at historic lows. Just 8.4% of Americans 1 year and older moved last year, part of a declining mobility trend since 2017. 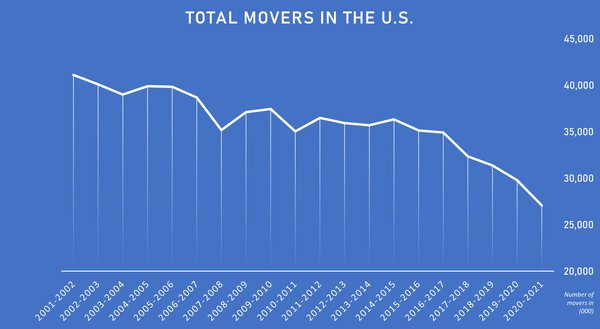 Census data paints a more boring, staid picture of Americans over the last three years. Even the big numbers of migration outflows look small when put into context. Over 400K people moved out of California from 2020-2021, but it represented just 1% of their population.

While the number of movers is comparable to previous non-COVID years, the South gained more residents than any other region. Florida leads the states in migration inflows, picking up 264K residents who moved to the Sunshine State from July 2020-2021. Texas is the second most popular state to move into, with over 200K new residents. But after those top two states, the number of people in moving vans quickly fall to less than half of those numbers.

Many direct marketers may be familiar with the USPS Change of Address dataset for CRM hygiene when updating addresses and cleaning mailing lists. That’s also yielded more nuanced and interesting American mobility insights. USPS has shared additional data with publications such as the Wall Street Journal and New York Times to dive deeper into consumers’ moving patterns. Overall, we can see that people didn’t move quite that far away. Most people who left big cities like Chicago, Philadelphia or DC, left for surrounding suburbs. From a media standpoint, your customers are likely still in the same DMA.

The more expensive cities like San Francisco and New York City fared the worst over the past two years. In 2020, just one household moved into NYC for every three that left. However, this longer-term growth trend of outflows to smaller, more affordable metros already existed. It is also worth remembering that international migration to these large cities has been at a bit of a standstill over the past two years. Demographics change over time, but centuries have proven that cities are harder to kill than countries.

Like so many pandemic trends, the past two years might have simply compressed demand time frames. For 8% of Americans, the product was housing. From young families pushed out into suburbs to young people gobbling up (cheaper) dense city housing, the pandemic spurred action and brought demand forward.

View original article published in The Marketing Insider from MediaPost